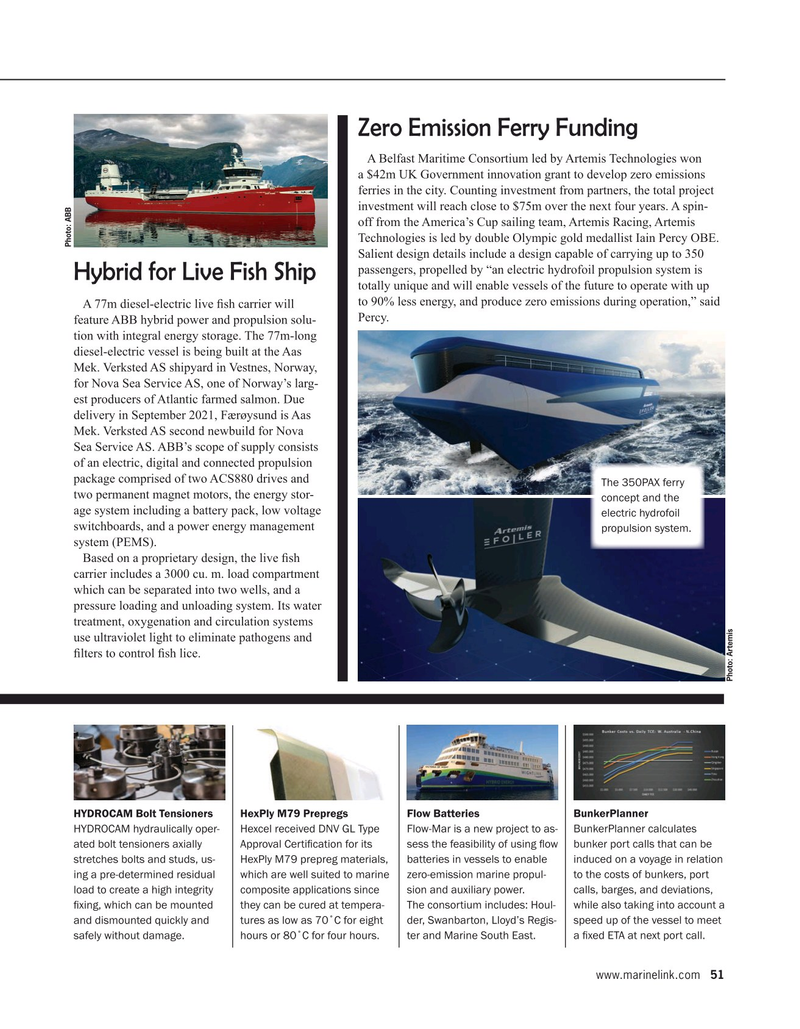 A Belfast Maritime Consortium led by Artemis Technologies won a $42m UK Government innovation grant to develop zero emissions ferries in the city. Counting investment from partners, the total project investment will reach close to $75m over the next four years. A spin- off from the America’s Cup sailing team, Artemis Racing, Artemis

Salient design details include a design capable of carrying up to 350 passengers, propelled by “an electric hydrofoil propulsion system is

Hybrid for Live Fish Ship totally unique and will enable vessels of the future to operate with up to 90% less energy, and produce zero emissions during operation,” said

feature ABB hybrid power and propulsion solu- tion with integral energy storage. The 77m-long diesel-electric vessel is being built at the Aas

Mek. Verksted AS shipyard in Vestnes, Norway, for Nova Sea Service AS, one of Norway’s larg- est producers of Atlantic farmed salmon. Due delivery in September 2021, Færøysund is Aas

Sea Service AS. ABB’s scope of supply consists of an electric, digital and connected propulsion package comprised of two ACS880 drives and

Based on a proprietary design, the live fsh carrier includes a 3000 cu. m. load compartment which can be separated into two wells, and a pressure loading and unloading system. Its water treatment, oxygenation and circulation systems use ultraviolet light to eliminate pathogens and flters to control fsh lice.

HYDROCAM hydraulically oper- Hexcel received DNV GL Type Flow-Mar is a new project to as- BunkerPlanner calculates ated bolt tensioners axially Approval Certifcation for its sess the feasibility of using fow bunker port calls that can be stretches bolts and studs, us- HexPly M79 prepreg materials, batteries in vessels to enable induced on a voyage in relation ing a pre-determined residual which are well suited to marine zero-emission marine propul- to the costs of bunkers, port load to create a high integrity composite applications since sion and auxiliary power. calls, barges, and deviations, fxing, which can be mounted they can be cured at tempera- The consortium includes: Houl- while also taking into account a and dismounted quickly and tures as low as 70°C for eight der, Swanbarton, Lloyd’s Regis- speed up of the vessel to meet safely without damage. hours or 80°C for four hours. ter and Marine South East. a fxed ETA at next port call. www.marinelink.com 51