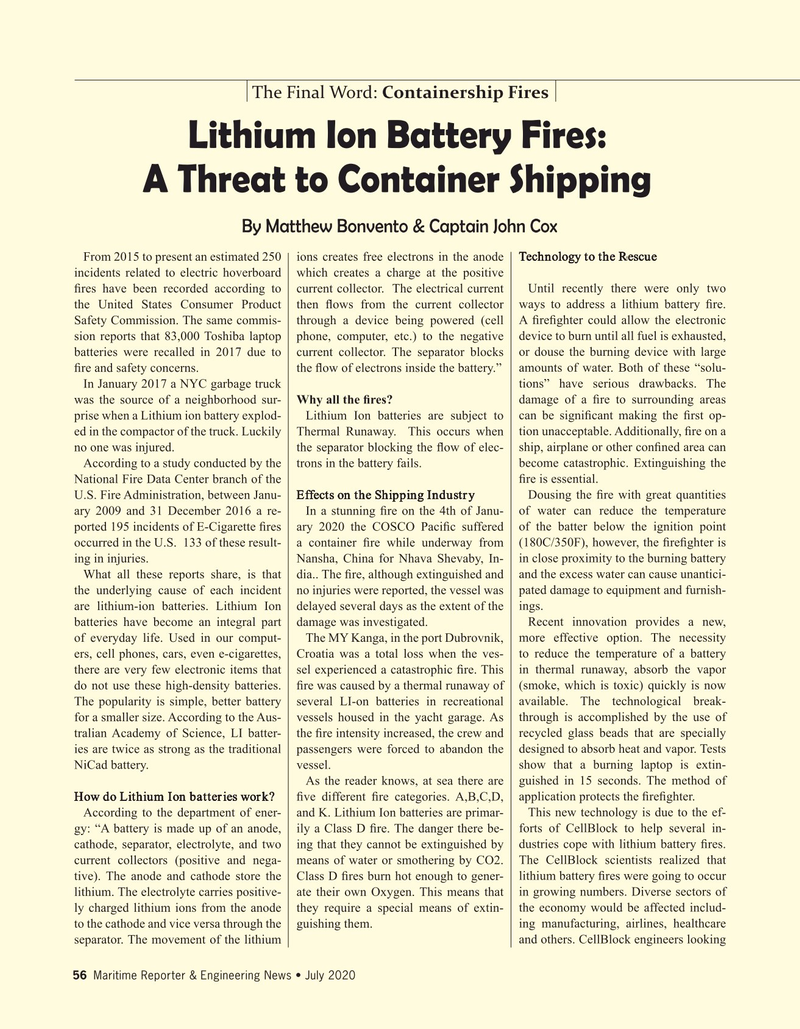 A Threat to Container Shipping

From 2015 to present an estimated 250 ions creates free electrons in the anode Technology to the Rescue incidents related to electric hoverboard which creates a charge at the positive fres have been recorded according to current collector. The electrical current Until recently there were only two the United States Consumer Product then fows from the current collector ways to address a lithium battery fre.

Safety Commission. The same commis- through a device being powered (cell A frefghter could allow the electronic sion reports that 83,000 Toshiba laptop phone, computer, etc.) to the negative device to burn until all fuel is exhausted, batteries were recalled in 2017 due to current collector. The separator blocks or douse the burning device with large fre and safety concerns. the fow of electrons inside the battery.” amounts of water. Both of these “solu-

In January 2017 a NYC garbage truck tions” have serious drawbacks. The was the source of a neighborhood sur- Why all the fres? damage of a fre to surrounding areas prise when a Lithium ion battery explod- Lithium Ion batteries are subject to can be signifcant making the frst op- ed in the compactor of the truck. Luckily Thermal Runaway. This occurs when tion unacceptable. Additionally, fre on a no one was injured. the separator blocking the fow of elec- ship, airplane or other confned area can

According to a study conducted by the trons in the battery fails. become catastrophic. Extinguishing the

National Fire Data Center branch of the fre is essential.

U.S. Fire Administration, between Janu- Effects on the Shipping Industry Dousing the fre with great quantities ary 2009 and 31 December 2016 a re- In a stunning fre on the 4th of Janu- of water can reduce the temperature ported 195 incidents of E-Cigarette fres ary 2020 the COSCO Pacifc suffered of the batter below the ignition point occurred in the U.S. 133 of these result- a container fre while underway from (180C/350F), however, the frefghter is ing in injuries. Nansha, China for Nhava Shevaby, In- in close proximity to the burning battery

What all these reports share, is that dia.. The fre, although extinguished and and the excess water can cause unantici- the underlying cause of each incident no injuries were reported, the vessel was pated damage to equipment and furnish- are lithium-ion batteries. Lithium Ion delayed several days as the extent of the ings.

batteries have become an integral part damage was investigated. Recent innovation provides a new, of everyday life. Used in our comput- The MY Kanga, in the port Dubrovnik, more effective option. The necessity ers, cell phones, cars, even e-cigarettes, Croatia was a total loss when the ves- to reduce the temperature of a battery there are very few electronic items that sel experienced a catastrophic fre. This in thermal runaway, absorb the vapor do not use these high-density batteries. fre was caused by a thermal runaway of (smoke, which is toxic) quickly is now

The popularity is simple, better battery several LI-on batteries in recreational available. The technological break- for a smaller size. According to the Aus- vessels housed in the yacht garage. As through is accomplished by the use of tralian Academy of Science, LI batter- the fre intensity increased, the crew and recycled glass beads that are specially ies are twice as strong as the traditional passengers were forced to abandon the designed to absorb heat and vapor. Tests

NiCad battery. vessel. show that a burning laptop is extin-

As the reader knows, at sea there are guished in 15 seconds. The method of

According to the department of ener- and K. Lithium Ion batteries are primar- This new technology is due to the ef- gy: “A battery is made up of an anode, ily a Class D fre. The danger there be- forts of CellBlock to help several in- cathode, separator, electrolyte, and two ing that they cannot be extinguished by dustries cope with lithium battery fres. current collectors (positive and nega- means of water or smothering by CO2. The CellBlock scientists realized that tive). The anode and cathode store the Class D fres burn hot enough to gener- lithium battery fres were going to occur lithium. The electrolyte carries positive- ate their own Oxygen. This means that in growing numbers. Diverse sectors of ly charged lithium ions from the anode they require a special means of extin- the economy would be affected includ- to the cathode and vice versa through the guishing them. ing manufacturing, airlines, healthcare separator. The movement of the lithium and others. CellBlock engineers looking 56 Maritime Reporter & Engineering News • July 2020